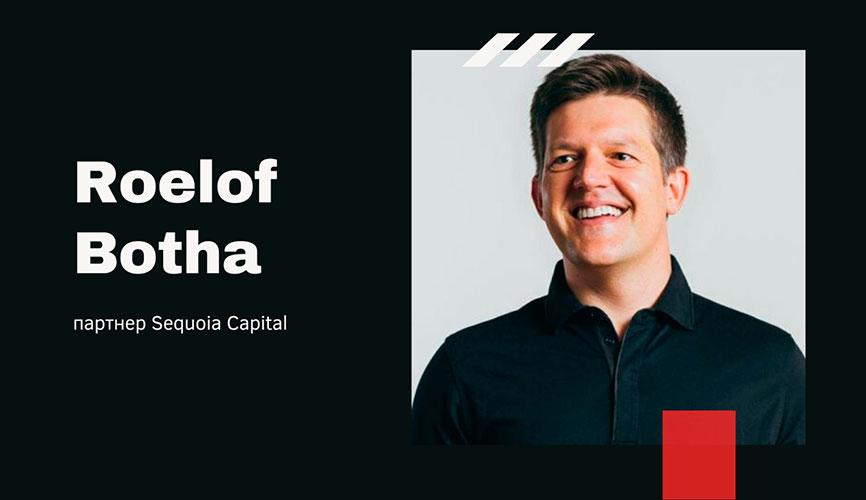 Tarang Shah's book "Venture Capitalists at Work" is useful for understanding how venture capitalists think, work and make decisions, and how they "felt" their unicorns. The book is instructive for those who want to get financing, work effectively in partnerships, and become successful investors.

Here are some of the secrets of success that Roelof Botha lets us in on.

Roelof Botha is a partner at Sequoia Capital (YouTube, Xoom, Green Dot, Dropbox, AdMob), a specialist in financial services, cloud computing, bioinformatics, consumer internet and consumer mobile companies. Prior to joining Sequoia in 2003, he was CFO of PayPal and consultant to McKinsey & Company. Roelof is ranked number 22 on Forbes’ Midas List (Rankings of Venture Capital Professionals) of Forbes 22, and is continuing to rise.

What does it take to create a billion dollar startup?

The key to a startup's success is motivation! The most successful entrepreneurs, as a rule, start with a desire to solve an interesting problem, which is often due to personal disappointment. The best companies are created by people who are not only motivated by money. They are not initially trying to build a company to make a billion dollars. Money is not a sufficient motivator; an entrepreneur is successful if they do what is really important for them. Omar Hamoui, who founded AdMob, is an excellent example of this. Omar was a developer of mobile applications, but became disappointed because he could not sell advertising to support his business. He tried to solve this problem by creating a mobile application for an advertising exchange. He didn't do it because he thought he could sell the company for 1 billion dollars - he was just trying to solve the problem for himself.

Another example is Dropbox. The idea that gave birth to a successful business also came from personal disappointment. The founders, Drew Houston and Arash Ferdowsi, were students, tired of walking from dorm rooms to computer rooms carrying flash drives back and forth. Sometimes the copied files would not be compatible or they would forget the flash drive. This made them ask themselves why, in a world where more and more people have multiple devices, there is still no shared file system, so you don't have to think, "What documents are on this computer?” I don't think they expected the company to reach tens of millions of consumers and grow to the size that it has.

What kind of startup or idea, in Roelof's opinion, can attract an investor?

You need to listen carefully to business founders or startups who can clearly articulate the problem and describe an elegant solution. If they can tell a plausible story with a compelling value proposition, they will attract investors and partners.

Does age matter to the entrepreneur?

It is true that many large IT companies were built by young people. One of the reasons that consumer companies are often built by very young people is that young people tend not to have entrenched habits. However, technological skills can be acquired by almost anyone, regardless of age, similar to musical talent. Those who are thirty-five or forty-five years old can easily become an entrepreneur. Many great companies were founded by people older than 40 years of age. Netflix, Green Dot and Isilon were not founded by twenty year olds. It is evident that more experienced people can start different businesses. For example, the average age has crept up on Facebook users. A person who can create a company that appeals to today's nineteen year olds is probably closer to nineteen than forty-nine years old. YouTube, Twitter and Facebook were created by people close in age to the people that were experiencing are need for these new services.

What skills are important in a company's employees?

The key characteristic of a good specialist is the desire to solve a problem for the client. It's a passion or drive, not "I think it will be a billion-dollar company and I want to join because I can get rich". We are looking for people who spread their ideas around and people who fight for an opportunity to work on a solution, not a money transfer.

You don't need someone whose inner motivation is: "No, we can't do that. We've tried it before, and it doesn't work.” Think about the amount of frustration people around the world experience every day. Most of the time when people are disappointed with something, they just shrug their shoulders because they are too lazy to do anything about it. They do not care enough. It takes a special person to see problems and roll up their sleeves to try and solve them.

Good entrepreneurs should also have passion and drive. One of the things that inspires me to invest is to listen to someone who is passionate about their business idea. You can feel their energy. Obviously, these people are smart, but they also have a desire to take responsibility, change the world and make it a better place. This is such an invigorating and electrifying characteristic.

Entrepreneurship is much more than just participating in projects as an investor. People do what they need to do and continue to solve problems. To a large extent, it is related to technology. Twenty years ago you needed a huge conglomerate of employees. Today you can rely on partners and specialists to unite your business. The average size of a business is getting smaller and smaller due to technology, improved communication and trade. This is fantastic!

Tell me, do you have a board on your Pinterest?

How to write an effective project description bepartner-global.com